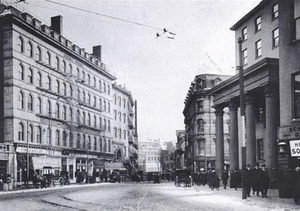 Bowdoin Square (established 1788) in Boston, Massachusetts was located in the West End. In the 18th and 19th centuries it featured residential houses, leafy trees, a church, hotel, theatre and other buildings. Among the notables who have lived in the square: physician Thomas Bulfinch; merchant Kirk Boott; and mayor Theodore Lyman. The urban renewal project in the West End in the 1950s removed Green Street and Chardon Street, which formerly ran into the square, and renamed some existing streets; it is now a traffic intersection at Cambridge Street, Bowdoin Street, and New Chardon Street.

Some of the features of Bowdoin Square in its heyday included:

All content from Kiddle encyclopedia articles (including the article images and facts) can be freely used under Attribution-ShareAlike license, unless stated otherwise. Cite this article:
Bowdoin Square (Boston) Facts for Kids. Kiddle Encyclopedia.