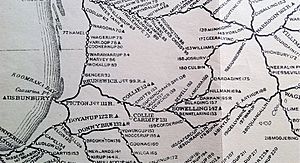 Narrogin and Wagin were the locations of junctions on the Great Southern Railway, while the railway to Collie connected with the South Western Railway at Brunswick Junction.

The branch lines were regularly reviewed as to their viability in the 1980s by Westrail management. and also by the Transport Commission

All content from Kiddle encyclopedia articles (including the article images and facts) can be freely used under Attribution-ShareAlike license, unless stated otherwise. Cite this article:
Bowelling, Western Australia Facts for Kids. Kiddle Encyclopedia.