Boyne Mountain Resort is a ski resort with a collection of accommodations in Northern Michigan located near Boyne City operated by Boyne Resorts. The center piece is an upscale resort called The Mountain Grand Lodge and Spa.

Boyne Mountain has continued use of the first chairlift built, constructed by the Union Pacific Railroad in 1936 for use at its new resort in Sun Valley, Idaho. It is also the location of Avalanche Bay, the largest indoor water park in Michigan. Boyne Mountain is the sister resort of Boyne Highlands.

The Boyne Mountain Resort was originally co-developed by Everett Kircher, Jim Christianson and John Norton. The group purchased the site for $1 in 1947 from Michigan Senator William Pierson and opened it as a ski resort in 1948. The founders acquired the first chairlift ever built (from Sun Valley, Idaho) and moved it to Boyne Mountain where parts are still in use today.

Boyne Mountain has ten chairlifts and a carpet lift, which lead to 60 runs including all of the standard difficulty ratings, from green to double black. Lift tickets are not required to ride the carpet lift or "Boyneland" chairlift, but those lifts only access green areas. 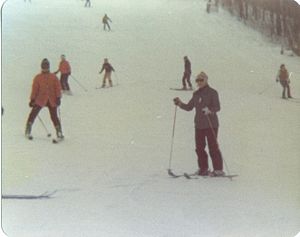 29% of the skiing area is beginner terrain, 41% is intermediate terrain, and 30% is expert terrain. The slopes are groomed, and the expert run "South McLouth" is occasionally used by a Slalom skiing group.

Boyne Mountain has four Terrain parks, a superpipe, a minipipe, and a ski/board cross course. The biggest park is called "Meadows Terrain Park," and others include "Ramshead Park" and "Fritz Progression Park." Terrain parks at Boyne Mountain are most commonly snowboarded, but skiers can be seen riding them too.

Boyne Mountain has two nearby golf courses: The Alpine and The Monument.

The Alpine course at Boyne Mountain weaves down the mountain towards Deer Lake. There are several water hazards and sand bunkers placed by the owners, making for, in their words, "A thrilling round."

The Monument course has each hole dedicated to a golf legend, and uses golf course designs pioneered by several different architects. The owners refer to it as a "playable hall of fame."

The Mountain Grand Lodge and Spa

The Mountain Grand Lodge and Spa is very close to the mountain and contains a spa, lodging, an indoor waterpark, and is located next to the Ski Rental Shop.

The Adventure Center's Zipline Adventure has a 2.5 hour long zipline tour and an under an hour Twin Zip. The full tour features 10 lines (9 in the winter) and reach speeds up to 20-25 mph. The Twin Zip is 780 feet long and 25+ feet high and is the last zip of the full tour.

Starting at the top of Boyne Mountain at Hemlock and ends at the Ski Patrol building. Disc rentals are available at the Adventure Center.

All content from Kiddle encyclopedia articles (including the article images and facts) can be freely used under Attribution-ShareAlike license, unless stated otherwise. Cite this article:
Boyne Mountain Resort Facts for Kids. Kiddle Encyclopedia.