Brachyglottis greyi, commonly known as daisy bush, is a member of the large family Asteraceae and belongs to the genus Brachyglottis or the genus Senecio depending on which authority is being followed, an endemic native of New Zealand and lately getting positive attention from gardeners. 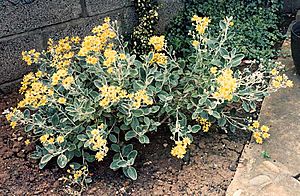 Stems and leaves: Somewhat curving stems, covered in white down.

These hybrids are hardy where it is warm and dry, they do well in coastal areas similar to where their parents live and mature into sprawling bushes of highly attractive foliage usually wider than high. Greyish foliage, the undersides of the leaves and stems are covered in white down and spectacular when in bloom with branching heads of brilliant yellow daisy-flowers.

The best known is "Sunshine" originally from New Zealand.

"Moria Read" is a variation of "Sunshine" whose leaves have a central, variously shaped areas of cream and pale green. It originated at Liskeard, Cornwall.

Primarily a coastal species of rock outcrops and bluffs but may extend inland up river gorges and in suitably exposed bluff habitats. Confined to the southern North Island from near Flat Point south to the mouth of the Orongorongo River.

All content from Kiddle encyclopedia articles (including the article images and facts) can be freely used under Attribution-ShareAlike license, unless stated otherwise. Cite this article:
Daisy bush Facts for Kids. Kiddle Encyclopedia.