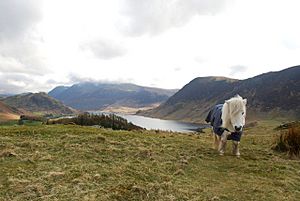 The view from the summit of Lanthwaite Hill in April 2008

Brackenthwaite Hows (also known as Lanthwaite Hill) is a hill in the Lake District of North West England.

Crummock Water, Looking Towards Buttermere, a view from the hill was painted by J. M. W. Turner in 1797.

In 2019 the National Trust paid £202,000 for 77 acres of land comprising the site from three different owners. One of the three owners was Ruth and David Hill who had owned part of Brackenthwaite Hows since 1990.

The general manager for the National Trust in the North Lakes, Tom Burditt, said that the trust would "explore ways to improve access routes to the historic viewing station" and "work hard to support this area of high cultural and ecological importance, which neighbours woodland, fells and lakes that we already look after. We plan to maintain its mosaic of veteran and younger trees and heathland habitats which provide a haven for rare birds, bluebells and red squirrels".

Alfred Wainwright in The North Western Fells, the sixth volume of his Pictorial Guide to the Lakeland Fells from 1964 described the hill as "an insignificant mound in stature and seems hardly worth turning aside to visit. But do it" and drew an illustration of himself admiring the view of High Stile from the hill.

All content from Kiddle encyclopedia articles (including the article images and facts) can be freely used under Attribution-ShareAlike license, unless stated otherwise. Cite this article:
Brackenthwaite Hows Facts for Kids. Kiddle Encyclopedia.