Bradford is a town in Gibson County, Tennessee, United States. The population was 1,048 at the 2010 census.

Bradford was named for Robert E. Bradford, an early settler. A post office has been in operation at Bradford since 1874.

During the April 2, 2006 Tornado Outbreak much of northern Bradford was damaged or destroyed; six residents of the area were killed, though none lived within the city limits.

According to the United States Census Bureau, Bradford has a total area of 1.8 square miles (4.7 km2), all land. 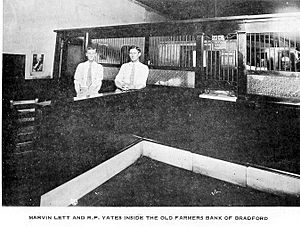 There were 472 households, out of which 25.8% had children under the age of 18 living with them, 53.0% were married couples living together, 12.7% had a female householder with no husband present, and 32.0% were non-families. 27.8% of all households were made up of individuals, and 14.8% had someone living alone who was 65 years of age or older. The average household size was 2.36 and the average family size was 2.89.

There are no colleges or universities in Bradford. The only college with a campus in Gibson County is the Dyersburg State Community College satellite campus in Trenton, approximately 10 miles away. The closest colleges are the University of Tennessee at Martin (located in Martin to the north), Bethel University (located in McKenzie to the Northeast), as well as several colleges and universities in Jackson, Tennessee (located to the south).

All content from Kiddle encyclopedia articles (including the article images and facts) can be freely used under Attribution-ShareAlike license, unless stated otherwise. Cite this article:
Bradford, Tennessee Facts for Kids. Kiddle Encyclopedia.