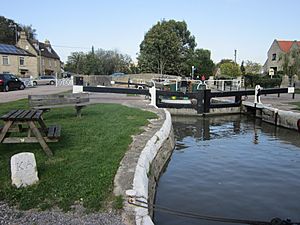 Bradford Lock is situated at Bradford on Avon on the Kennet and Avon Canal, England.

There are moorings above and below Bradford Lock. Next to the canal, a little way west of the lock, is a huge 14th-century tithe barn. Beside the lock is Bradford Wharf where there are several historical buildings associated with the canal. The Wharfinger's House was the home of the Canal Company employee who managed the wharf. Across the canal was a gauging dock where canal boats were measured and weighed to determine toll rates.

The pound below the lock is about ten miles (16 km) long and is the second longest on the canal, finishing when arriving at Bath Locks.

All content from Kiddle encyclopedia articles (including the article images and facts) can be freely used under Attribution-ShareAlike license, unless stated otherwise. Cite this article:
Bradford Lock Facts for Kids. Kiddle Encyclopedia.