Kids Encyclopedia Facts
Not to be confused with Bradley County Courthouse Annex.

Bradley County Courthouse is a courthouse in Warren, Arkansas, United States, the county seat of Bradley County, built in 1903. It was listed on the National Register of Historic Places in 1976. The courthouse was built using two colors of brick and features a 2½ story clock tower.

Bradley County was established in 1840 from Union County and was named for Hugh Bradley. Eventually Bradley County was fragmented into five more counties. Pennington Settlement, later renamed Warren, became the county seat around 1840. Two courthouses, a log cabin and later a brick and stucco building, were used for county business until the building of the current structure in 1903. 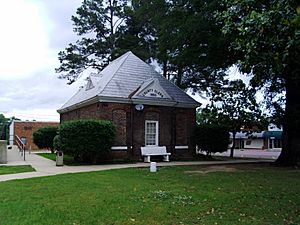 The Bradley County Courthouse has a two-tone brick exterior with quoin arched windows as well as gauged voussoirs and dentils along the cornices. A tower in one corner of the structure has clocks facing all four directions, an arched cupola, and a hexagonal shaped roof. Also included on the National Register of Historic Places is a one-story brick building built in 1890. Originally the county clerk's office, the building now serves as a library.

All content from Kiddle encyclopedia articles (including the article images and facts) can be freely used under Attribution-ShareAlike license, unless stated otherwise. Cite this article:
Bradley County Courthouse and Clerk's Office Facts for Kids. Kiddle Encyclopedia.