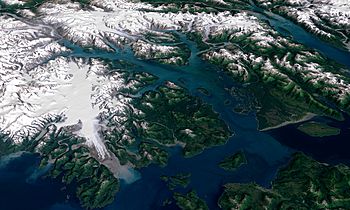 A Landsat image of part of the Glacier Bay National Park and Preserve, with the Brady Glacier in the left foreground, August 1, 1999.

When George Vancouver first set eyes on the Brady Glacier in 1794, it was a calving tidewater glacier that dumped ice into the Taylor Bay. The following century, the glacier advanced eight kilometers. This advance was taken by Bengston (1962) as a sign of the glacier changing from a tidal to non-tidal one. Bengston also stated that the huge outwash plain at the glacier's terminus allows it to preserve itself even as most glaciers in the region retreated. The Brady Glacier has an ELA (the line above which snow remains even after summer's end) of only 800 meters, one of the lowest in Alaska. 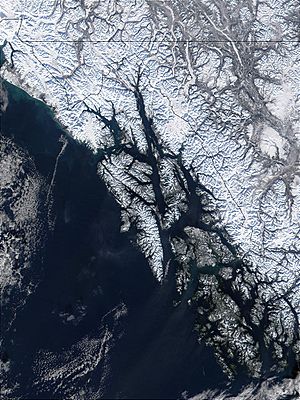 Map showing the region of the Brady Glacier

All content from Kiddle encyclopedia articles (including the article images and facts) can be freely used under Attribution-ShareAlike license, unless stated otherwise. Cite this article:
Brady Glacier Facts for Kids. Kiddle Encyclopedia.