Donato Bramante (1444 – 11 April 1514), born as Donato di Pascuccio d'Antonio and also known as Bramante Lazzari, was an Italian architect. He introduced Renaissance architecture to Milan and the High Renaissance style to Rome, where his plan for St. Peter's Basilica formed the basis of design executed by Michelangelo. His Tempietto (San Pietro in Montorio) marked the beginning of the High Renaissance in Rome (1502) when Pope Julius II appointed him to build a sanctuary over the spot where Peter was allegedly crucified.

Bramante was born under the name Donato d'Augnolo, Donato di Pascuccio d'Antonio, or Donato Pascuccio d'Antonio in Fermignano near Urbino. Here, in 1467, Luciano Laurana was adding to the Palazzo Ducale an arcaded courtyard and other Renaissance features to Federico da Montefeltro's ducal palace. Bramante's architecture has eclipsed his painting skills: he knew the painters Melozzo da Forlì and Piero della Francesca well, who were interested in the rules of perspective and illusionistic features in Mantegna's painting.

Around 1474, Bramante moved to Milan, a city with a deep Gothic architectural tradition, and built several churches in the new Antique style. The Duke, Ludovico Sforza, made him virtually his court architect, beginning in 1476, with commissions that culminated in the famous trompe-l'oeil choir of the church of Santa Maria presso San Satiro (1482–1486). Space was limited, and Bramante made a theatrical apse in bas-relief, combining the painterly arts of perspective with Roman details. There is an octagonal sacristy, surmounted by a dome. In Milan, Bramante also built the tribune of Santa Maria delle Grazie (1492–99); other early works include the Cloisters of Sant'Ambrogio, Milan (1497–1498), and some other constructions in Pavia and possibly Legnano. However, in 1499, with his Sforza patron driven from Milan by an invading French army, Bramante made his way to Rome, where he was already known to the powerful Cardinal Riario. 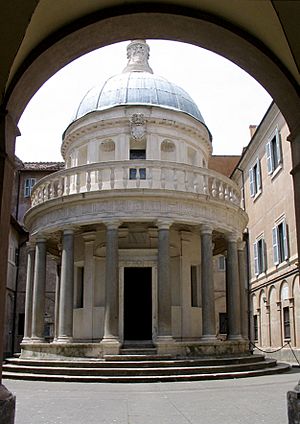 In Rome, he was soon recognized by Cardinal Della Rovere, shortly to become Pope Julius II. For Ferdinand of Aragon and Isabella of Castile or possibly Julius II, Bramante designed one of the most harmonious buildings of the Renaissance: the Tempietto (1510) of San Pietro in Montorio on the Janiculum. Despite its small scale, the construction has all the rigorous proportions and symmetry of Classical structures, surrounded by slender Doric columns, surmounted by a dome. According to a later engraving by Sebastiano Serlio, Bramante planned to set it within a colonnaded courtyard. In November 1503, Julius engaged Bramante for the construction of the grandest European architectural commission of the 16th century, the complete rebuilding of St Peter's Basilica. The cornerstone of the first of the great piers of the crossing was laid with ceremony on 17 April 1506. Very few drawings by Bramante survive, though some by his assistants do, demonstrating the extent of the team which had been assembled. Bramante's vision for St Peter's, a centralized Greek cross plan that symbolized sublime perfection for him and his generation (compare Santa Maria della Consolazione at Todi, influenced by Bramante's work) was fundamentally altered by the extension of the nave after his death in 1514. Bramante's plan envisaged four great chapels filling the corner spaces between the equal transepts, each one capped with a smaller dome surrounding the great dome over the crossing. So Bramante's original plan was very much more Romano-Byzantine in its forms than the basilica that was actually built. (See St Peter's Basilica for further details.)

Bramante also worked on several other commissions. Among his earliest works in Rome, before the Basilica's construction was under way, is the cloister (1500–1504) of Santa Maria della Pace near Piazza Navona.

All content from Kiddle encyclopedia articles (including the article images and facts) can be freely used under Attribution-ShareAlike license, unless stated otherwise. Cite this article:
Bramante Facts for Kids. Kiddle Encyclopedia.