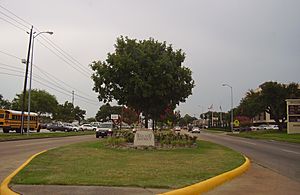 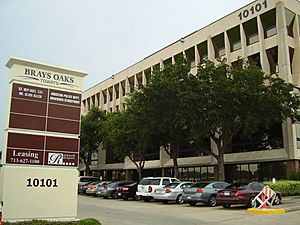 The area now known as Brays Oaks was originally the ranch property of Walter Fondren, an oil businessperson.

In the late 1970s and early 1980s many apartments opened in an 8 square miles (21 km2) area then known as Fondren Southwest. The community was mostly White and Jewish. The newly established apartments attracted young, White professionals who were leaving Stella Link and other declining areas. The area economy benefited from the increase in population, and many expensive restaurants and strip malls opened in Fondren Southwest. At one time many members of the Houston Rockets and other sports teams resided in the Northfield subdivision, which was among the outermost parts of the city in 1974, in Fondren Southwest.

In the mid-1980s the oil-based economy collapsed. Property values decreased and apartment complexes began to decline. The young professionals left the apartments. The expensive restaurants left the area, since the young professionals left. The owners of the apartments lowered rent rates and offered "free move-in" specials. Many poor African-American and Hispanic families moved into units originally designated for singles and couples. Apartment complexes failed and received foreclosure. Many apartments had changed of ownership around every two years; the out of state owners were more interested in maximizing profits and less interested in the maintenance of the complexes. In the late 1980s the White population decreased and the Black and Hispanic populations increased.

By the mid-1990s property values in the area began to increase and several middle class minorities moved into Fondren Southwest. Around the 2000s Orthodox Jewish congregations moved to Fondren Southwest. In 2005 Houston City Council Member Mark Goldberg and Jim Myers, head of the nonprofit group Southwest Houston 2000 Inc., lobbied the state government, asking the state to create what was originally called the Fondren Ranch Management District. In June 2005 the 79th Texas Legislature created the Brays Oaks Management District in the area.

In 2005 residents of an area at the intersection of Beltway 8 and West Bellfort Road protested against the construction of a proposed trash transfer station. The area sits on a landfill previously used by the cities of Bellaire and West University Place.

In 2009 the district began a $250,000 master plan to increase identification of the area and to beautify esplanades. Ten 800-pound (360 kg) boulders were placed in the district esplanades beginning on January 22, 2009.

In 2011 the district expanded in size.

The district, entirely within the City of Houston and Harris County, has 15 square miles (39 km2) of territory, centered on the historical Fondren Southwest area. The district is bounded by Interstate 69/U.S. Route 59, Bissonnet Road, U.S. Route 90A/Main Street, and South Post Oak. As of 2011 it has about 73,000 residents in about 2,700 households. Several subdivisions, including Braeburn Valley West, Glenshire, and Westbury are in Brays Oaks. The district expanded in size in 2011.

Originally, the district had about 9 square miles (23 km2) of land. It was bounded by Interstate 69/U.S. Route 59, Brays Bayou, Hillcroft Avenue, and U.S. Route 90A (South Main), including areas within the City of Houston and excluding areas within the Westbury subdivision. In 2005 what would become the original boundaries include 37 neighborhoods with about 12,000 single-family houses. It also included about 76 apartment complexes with over 15,000 units. The original Fondren Southwest area has the boundaries of South Braeswood, U.S. 90A, Hillcroft, and I-69/U.S. 59. Most apartments in Fondren Southwest have between 300 and 400 units. Lori Rodriguez of the Houston Chronicle said that many of them "bear names evocative of more idyllic times: Sandpiper. Rainy Meadows."

Originally the only residential establishments in Fondren Southwest were houses. Gessner Road was a dirt road, and the pavement along South Braeswood Boulevard ended at Fondren Road. Ruth Hurst, a resident quoted in the Houston Chronicle, said "It was like living in the middle of the city, but in the country".

Fondren Southwest is home to one of the centers of Orthodox Jewish life in Houston. The neighborhood is home to three Orthodox synagogues: Chabad Lubavitch Center of Houston, Young Israel of Houston, and Congregation Beth Rambam. The neighborhoods surrounding the synagogues have an [Eruv] maintained by Young Israel of Houston. There are also two Orthodox [Jewish Day Schools] in the area: Torah Day School of Houston and Yeshivat Torat Emet. There is also an Orthodox Jewish girls' high school, Torah Girls Academy of Texas.

The district gained more parks when it expanded in 2011.

In regards to Fondren Southwest, Lori Rodriguez said in 1997, "Green space is at a premium; free recreational facilities, almost nil. Hundreds of latch-key children of single, working mothers wander the streets with nothing to do; nowhere to go."

As of 2005 the area that would become the original Brays Oaks district boundaries had between 200 and 300 businesses. State of Texas guidelines consider apartment complexes to be commercial businesses, so the figure includes apartment complexes. Foodarama has its corporate headquarters in Store #1 in Brays Oaks. 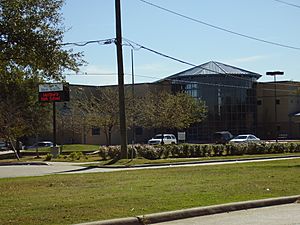 The Houston Independent School District serves most of Brays Oaks. 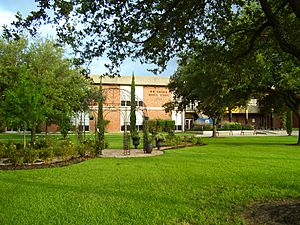 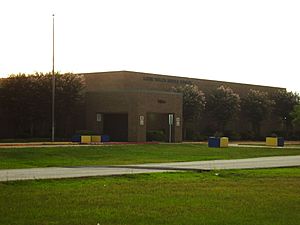 In the 1980s area schools became overcrowded as more students moved in. Enrollments in area schools increased when several adults-only apartments began allowing children to live in them. For instance, Elrod's enrollment had increased steadily from 1983 onwards. In 1986 Elrod served Maplewood South and ten apartment complexes; none of the complexes existed when Elrod was originally built. In 1986 the Elrod administration expected to receive 800 students for the upcoming school year; 974 appeared on the first day of school. In 1988 Gordon re-opened to take overflow students for Elrod and one other school.

Milne opened in 1991. In August 1996 Valley West opened in ten classrooms in the Sugar Grove Elementary School campus. HISD purchased a former Food Lion building in what is now Brays Oaks and began remodeling it. Valley West moved into the former grocery store in July 1997. Halpin was dedicated during that year.

In 1996 Welch had 1,700 students, making it over capacity. There were also issues with the sewage system in the temporary building area as well as roof leaks and water issues from condensation.

Argyle Elementary School, occupying a former skating rink opened in a shopping center in 1999; it expanded by taking spaces formerly held by church offices, a dollar store, and a fitness equipment store. In fall 2001 Gross opened in the campus formerly occupied by I. Weiner Jewish Secondary School, now The Emery/Weiner School. Gross was named after real estate developer Jenard M. Gross, who owned and operated over 14,000 apartment units in various U.S. states. Argyle closed in May 2005. Sugar Grove in Sharpstown received a grade 5-6 attendance boundary in 2009.

Gordon Elementary School in the City of Bellaire served as a relief school for Elrod and Milne in Fondren Southwest/Brays Oaks and two elementary schools in Gulfton. until it was converted into a Mandarin immersion school in 2012.

Houston Community College (HCC) operates the Brays Oaks Campus, a part of the Southwest College. Groundbreaking was scheduled for May 26, 2015. 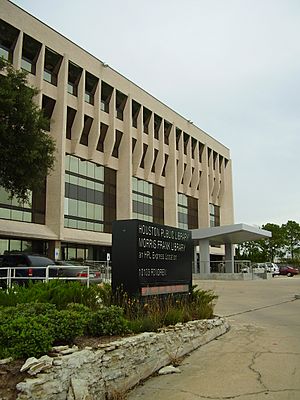 Houston Public Library operates the Morris Frank HPL Express Library in the Brays Oaks Towers. The branch relocated there from a standalone location. The branch is located in a 12,000-square-foot (1,100 m2) section within one half of the first floor of 10103 Fondren Road.

The original 17,000-square-foot (1,600 m2) Frank Neighborhood Library opened in 1983. In 2005 about 2.5 million dollars in funds were approved to overhaul the branch. Shortly afterwards library officials found that the location was within a Harris County floodplain. Wendy Hegar, the assistant director for planning and facilities at the Houston Public Library, said that in order to keep using the original location, the library system would have had to spend millions of dollars to raise the floor of the facility by 1 foot (0.30 m) or to build a 2-foot-tall (0.61 m) concrete flood wall. Jim Myers, the community services director of the Brays Oaks District, said that the building would have had to have been raised by 18 inches (460 mm) in order for the library system to keep using it. Instead the city decided to relocate into the Brays Oaks Towers, spending around $3.9 million. Sandra Fernandez, a spokesperson for Houston Public Library, said that the estimated cost to build a new standalone library branch was 6 to 7 million dollars. The $2.5 million originally earmarked for the standalone Frank library was moved to a different project. The City of Houston entered into a 10-year lease to occupy space in the Brays Oaks Towers. By December 2009 the former Frank library facility was for sale. 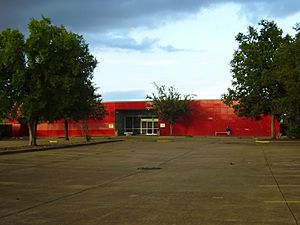 HPL Express Frank was scheduled to have around half of the 90,000 items in the standalone Frank Neighborhood Library. The standalone Frank library had about 105,000 visitors in the fiscal year 2007. In the Brays Oaks Towers location, contractors rebuilt the space to prepare the housing of a library branch, adding a separate air conditioning system, additional electrical infrastructure, additional toilets, and a redesign of the layout of the space. Etan Mirwis, president of Houston-based property management company Rockwell Management Corp, which owns the Brays Oaks Towers complex, said that he saw the addition of the library branch as a potential for his complex, as he believed several businesses considering whether to move into the complex would view the presence of the library as a benefit.

HPL will replace HPL Frank with a new library, which will also replace the George B. Meyer Branch, at 5505 Belrose on a 2.5-acre (1.0 ha) plot of land in Westbury.

All content from Kiddle encyclopedia articles (including the article images and facts) can be freely used under Attribution-ShareAlike license, unless stated otherwise. Cite this article:
Brays Oaks, Houston Facts for Kids. Kiddle Encyclopedia.