Breath Savers is a brand of mint manufactured by the Hershey Company. Breath Savers were introduced in 1973 by the Life Savers Company, a division of E.R. Squibb, in limited areas, and were originally sugared. The brand became a national brand in 1978 when it replaced sugar with saccharin and became sugar-free from then on. Nabisco acquired the Life Savers Company from E.R. Squibb in 1981, and in 2000, after its merger with Kraft Foods, it sold its gum and breath mint business to Hershey. The main ingredient found in Breath Savers is sorbitol.

As the name and design suggests, Breath Savers are modeled after Life Savers, beveled at the outer edges and having a shallow depression in the center, on both sides. Each Breath Saver is counterembossed on one side with the legend "BREATH SAVER" in raised letters about 0.3 mm high in a circular pattern around the center. They are packaged in three ways:

Breath Savers are advertised as containing "Neutrazin", an ingredient claimed to neutralize and eliminate bad breath temporarily. Neutrazin is used today in several other mints and mint-like products. It is not stated which ingredients of the ingredient list (see infobox) compose Neutrazin.

Breath Savers have also begun advertising some of their mints to contain sodium bicarbonate, an alkaline salt used in many personal hygiene products as a mechanical cleanser on the teeth and gums. It also neutralizes the production of acid in the mouth, and acts as an antiseptic to help prevent infections. 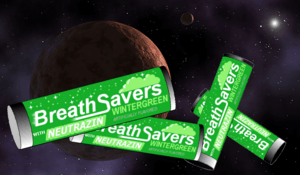 All content from Kiddle encyclopedia articles (including the article images and facts) can be freely used under Attribution-ShareAlike license, unless stated otherwise. Cite this article:
Breath Savers Facts for Kids. Kiddle Encyclopedia.