Polo Mints is a brand of breath mint whose defining feature is the hole in the middle. The peppermint flavoured Polo was first manufactured in the United Kingdom in 1948, by employee John Bargewell at the Rowntree's Factory, York, and a range of flavours followed. The name derives from "polar", referencing the cool, fresh taste of the mint.

Polo mints, which resemble the confectioneries Life Savers and British Navy Sweets, were developed by Rowntree's in 1939, but their introduction to the market was delayed until 1947, by the onset of the Second World War. Polo fruits followed soon afterward.

Before this, Rowntree had already experimented with different Polos in the 1980s. Polo Fruits were always available, but they briefly made: 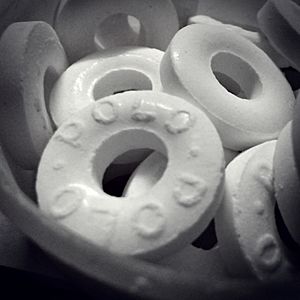 A Polo is approximately 1.9 centimetres (0.75 in) in diameter and 0.4 centimetres (0.16 in) thick, with a 0.8-centimetre (0.31 in)-wide hole. The original Polo is white in colour with a hole in the middle, and the word 'POLO' embossed twice on the upper flat side of the ring, hence the popular slogan The Mint with the Hole. 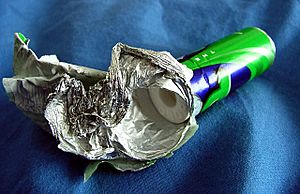 An open packet of Polo mints

Polos are usually sold in individual packs of 25 mints, which measure about 10 cm tall. The tube of Polos is tightly wrapped with aluminium foil backed paper. A green and blue paper wrapper, with the word 'POLO', binds the foil wrapper, with the Os in 'Polo' represented by images of the sweet. For the spearmint flavour, the paper wrapper is turquoise in colour, and the Extra Strong flavour is in a black paper wrapper.

When the Trade Marks Act 1994 was introduced in the United Kingdom, Nestlé applied to register the shape of the Polo mint. The application featured a white, annular mint without any lettering. This application however was opposed by Kraft Foods, the then owner of Life Savers, and Mars UK, because of the lack of distinctive character of the mint in question.

Kraft Foods and Swizzels Matlow (owner of British Navy Sweets) have made similar applications for annular sweets bearing the mark LIFESAVERS or NAVY. Nestlé has tried to oppose these trademark applications but has failed as the court ruled that customers would be able to distinguish between a Polo, a Lifesaver and a British Navy mint as all of them have their marks boldly and prominently embossed on the mint.

During the 1980s, Peter Sallis provided the voiceover for television advertisements. With the launch of the spearmint variety, a new television campaign featured a voiceover by Danny John-Jules, using a voice similar to the one he employed as the Cat on Red Dwarf.

In 1995, the company launched a major advertising campaign produced by Aardman Animations, which showed animated Polos on a factory production line. In one, a scared Polo without a hole attempts to escape, but is restrained by the hole punching machinery. Polo experimented with other forms of advertising in the end of the 1990s. In 1998, they collaborated with PolyGram for a compilation album, Cool Grooves, which reached No. 12 in the UK Compilation Chart on 5 September that year.

All content from Kiddle encyclopedia articles (including the article images and facts) can be freely used under Attribution-ShareAlike license, unless stated otherwise. Cite this article:
Polo (confectionery) Facts for Kids. Kiddle Encyclopedia.