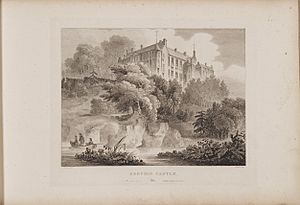 Engraving of the castle from Scotia Depicta by James Fittler 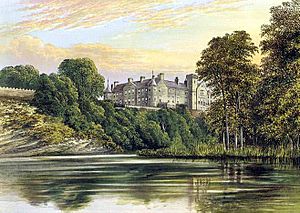 Brechin Castle is a castle in Brechin, Angus, Scotland. The castle was constructed in stone during the 13th century. Most of the current building dates to the early 18th century, when extensive reconstruction was carried out by architect Alexander Edward for James Maule, 4th Earl of Panmure, between approximately 1696 and 1709. The castle is a 37,748 square feet (3,506.9 m2) Category A listed building and the grounds are included in the Inventory of Gardens and Designed Landscapes in Scotland. 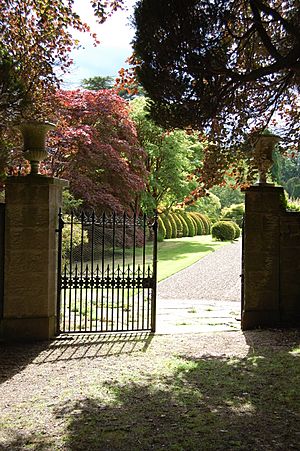 A garden gate at Brechin Castle

Marie Stewart, Countess of Mar entertained her brother-in-law, the Earl of Huntly at Brechin in September 1593. She hosted John Taylor the Water Poet, and King James on his return to Scotland in 1617. She had inventories made of the contents and furnishings of Brechin Castle in 1611 and 1622. Brechin Castle has been a stronghold of the Ramsay family since around 1645.

The estate consisted of approximately 150,000 acres (61,000 ha) at its height and is now 55,000 acres (22,000 ha). The formal gardens date to the early 18th century. Agriculture and forestry largely dominate the estate grounds, but tourists can stay at several guest lodges on the property.

The castle has been Category A Listed since 1971. The summary states that the battlemented flank walls were added in the mid-1800s, the building was remodelled 1854 and that a tower was added in 1863. Other modifications were also made in that era.

A 1990s addition to the grounds is Brechin Castle Centre, described as a "Country Park with Cafe and Garden Centre, plus loads of kids activities in the Park and in a Yard Play Area." As of 2018 the castle and gardens were open to the public in June/July.

Sale of the castle

In 2019, the building and 70-acre grounds of Brechin Castle were put up for sale, with James Ramsay, 17th Earl of Dalhousie and chief of Clan Ramsay citing prohibitive upkeep costs as the motivating factor. A news report stated that the castle has eight reception rooms, 16 bedrooms and 10 bathrooms. Another news report made this statement: "Of the early medieval building little evidence remains. The oldest part of the current castle is the kitchen block, where can be seen a stone bearing the date 1703, but in 1711 major renovations were made which gave the building its current form". Edzell and Invermark and the family businesses – including Brechin Castle Garden Centre and Peggy Scott’s – were not being sold.

All content from Kiddle encyclopedia articles (including the article images and facts) can be freely used under Attribution-ShareAlike license, unless stated otherwise. Cite this article:
Brechin Castle Facts for Kids. Kiddle Encyclopedia.