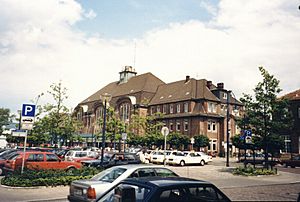 Bremerhaven Hauptbahnhof is the central railway station in Bremerhaven, Germany.

In 1944, in the middle of World War II, the hall over the railway tracks was destroyed by a bomb that was thrown from an American plane. The hall was not built again after the war.

Wesermünde received another name and was called Bremerhaven from 1947, and the station received the new name too and was now called Bremerhaven Hauptbahnhof. That means "Bremerhaven Central Station", and it was called that way because it was now in the middle of the new, large city. Electric cables were put in the station in 1966, so that electric trains could run. Trains that were carrying soldiers of the US Army often ran to Bremerhaven in the 1970s, because the US Army had large barracks in the city.

All content from Kiddle encyclopedia articles (including the article images and facts) can be freely used under Attribution-ShareAlike license, unless stated otherwise. Cite this article:
Bremerhaven Hauptbahnhof Facts for Kids. Kiddle Encyclopedia.