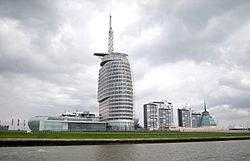 Bremerhaven is a city in the north of Germany, in the state of Bremen. It is where the rivers Weser and Geeste meet.

Bremerhaven has more than 115,000 people. It lives mostly on its marine industry. The city was founded in 1827.

Bremerhaven has an oceanic climate (Cfb in the Köppen climate classification).

Panoramic view to Bremerhaven from Bremerhaven Radar Tower. On the left side is the city including „Columbus-Center“, some tourist attractions (including the "Havenwelten" just under construction)

All content from Kiddle encyclopedia articles (including the article images and facts) can be freely used under Attribution-ShareAlike license, unless stated otherwise. Cite this article:
Bremerhaven Facts for Kids. Kiddle Encyclopedia.