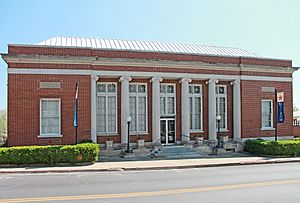 The Brenham Heritage Museum is a local history museum located in downtown Brenham, Texas. Exhibits and collections reflect a focus on the history and culture of the Brenham and Washington County area. The museum is located in the old US Post Office-Federal Building-Brenham, a National Register of Historic Places building. The museum operates a second site, the Bus Depot Gallery, in the Art-Deco Kerrville Bus Lines Depot of Brenham.

In 1991, the City of Brenham offered an historic building for use as a museum to the Brenham Heritage Museum, a non-profit organization in Brenham, Texas. A non-profit was established, some collections were acquired, funds were raised and the museum opened soon after.

The Brenham Heritage Museum has acquired the body of her collections from the citizenry of Brenham, Texas and the surrounding Washington County. A number of groups and organizations have provided the museum with significant portions of the collection:

Museum structure as a heritage site

The Brenham Heritage Museum is located in what was once the US Post Office for the City of Brenham. The building was constructed between 1914 (when the land was first acquired) and 1916 (when construction was completed). It remained the post office until the mid-1960s, when a new post office was built nearby. The old post office structure became a federal office building.

Listed on the National Register of Historic Places in 1990, it was added due to its notable Classical Revival architecture.

All content from Kiddle encyclopedia articles (including the article images and facts) can be freely used under Attribution-ShareAlike license, unless stated otherwise. Cite this article:
Brenham Heritage Museum Facts for Kids. Kiddle Encyclopedia.