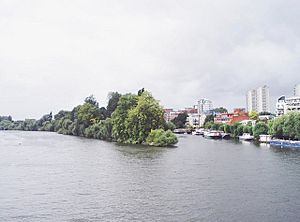 Brentford Ait is a long 4.572-acre (1.9 ha) uninhabited ait (river island) in the River Thames, with no buildings, on the Tideway near Brentford in London, England.

It is administered by the London Borough of Richmond upon Thames and Port of London Authority. Its west part was last accurately measured as 1.956 acres (0.8 ha); its east 2.616 acres (1.1 ha) being longer and the same width. Brentford Ait has a gap in the middle known as Hog Hole which is apparent at lower tides, dividing the ait into "upper" and "lower" sections. 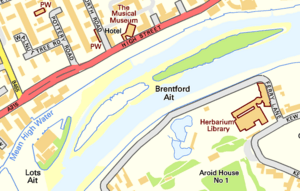 Map of Brentford and Lot's Aits

Brentford Ait was also formerly known as Makenshaw, Mattenshaw or Twigg Ait. In the 18th century the ait was inhabited and buildings included a notorious pub called the Swan or Three Swans – its trade was ended in 1796. On the Brentford bank, the Swan Steps lead down to the river at the east end of the long and narrow riverside park, Waterman's Park, at the site of the crossing to this pub. The ait was planted with trees in the 1920s to screen Brentford's gasworks from the view of Kew Gardens. The ait is covered by willows and alder and is a bird sanctuary with a significant heronry. For historic reasons unknown the parish of Kew in Surrey included Brentford in its history; the London Borough of Hounslow administers the neighbouring Lot's Ait separated by thick, shifting mud at low tide from Brentford whereas channels on both sides of this ait are dredged.

All content from Kiddle encyclopedia articles (including the article images and facts) can be freely used under Attribution-ShareAlike license, unless stated otherwise. Cite this article:
Brentford Ait Facts for Kids. Kiddle Encyclopedia.