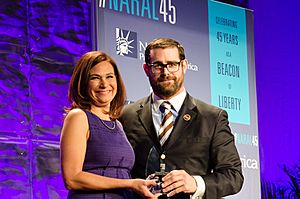 Brian K. Sims was the first college American football captain to come out as gay. He is also the first openly gay person elected to the Pennsylvania General Assembly.

Sims's parents were both colonels in the U.S. Army. He has a twin brother, an older brother, and a younger sister. He went to high school in Chester County, Pennsylvania.

Sims has a bachelor of science degree from Bloomsburg University of Pennsylvania. He also has a juris doctor degree from the Michigan State University College of Law.

At Bloomsburg, Sims was the captain of the 2000 National Championship Division II football team. He was a first-string defensive tackle. He became the only openly gay college football captain in NCAA history.

All content from Kiddle encyclopedia articles (including the article images and facts) can be freely used under Attribution-ShareAlike license, unless stated otherwise. Cite this article:
Brian Sims Facts for Kids. Kiddle Encyclopedia.