The Bridge in West Earl Township, as it is designated on the National Register of Historic Places, is also known by its historic name, Big Conestoga Creek Bridge No. 12. It carries Farmersville Road (unsigned SR 1010) across the Conestoga River at Brownstown, West Earl Township, Lancaster County, Pennsylvania, in the United States. The bridge is notable for its form, a three-span, continuous, arched concrete girder that does not touch the abutments. Designer Frank H. Shaw was a consulting engineer to Lancaster County when the bridge was constructed in 1917, but appointed county engineer that same year. The bridge was replaced with a new three-span structure in 2019. 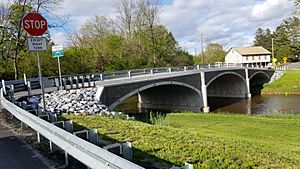 2019 Farmersville Road Bridge in Brownstown PA. Consideration was given to the aesthetics of the new bridge, since it replaced a National Historic Landmark.

All content from Kiddle encyclopedia articles (including the article images and facts) can be freely used under Attribution-ShareAlike license, unless stated otherwise. Cite this article:
Bridge in West Earl Township Facts for Kids. Kiddle Encyclopedia.