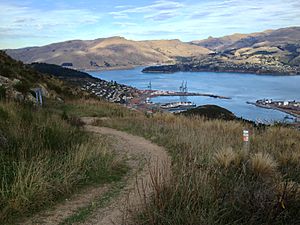 Looking down to Lyttelton Harbour from the top of Bridle Path 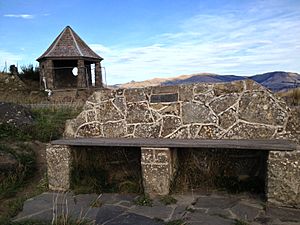 The Canterbury Pioneer Women's Memorial at the top of Bridle Path, with the Jane Deans memorial seat in the foreground

The Bridle Path is a steep track that traverses the northern rim of the Lyttelton volcano connecting the city of Christchurch and the port of Lyttelton in the South Island of New Zealand.

It was constructed in 1850 as a bridle path for leading horses, and was used by the early European settlers as a route from the port to new settlements on the northern side of the Port Hills. Although very steep, it was the only means of traversing the hills until Summit Road over Evans Pass was completed in 1857. Originally, the road over Evans Pass was to be completed by the time the first settlers arrived but the Canterbury Association ran out of money, John Robert Godley had the work stopped, and had a rough Bridle Path cut instead. The track ascends from the port itself to a height of 350 metres (1,150 ft) before descending again via Heathcote Valley to Christchurch. It remains popular today as a walking and mountain biking route. The track is a legal road and use by trail bikes is legal but regarded as a nuisance. There have been attempts to change the legal status from road to park since the 1970s.

The Canterbury Pioneer Women's Memorial is placed at the top of the Bridle Path next to the Summit Road. The foundation stone for the memorial was laid by Lilian Priscilla Wakefield, the granddaughter of Edward Gibbon Wakefield, on 16 December 1939. The shelter was designed by Heathcote Helmore. The memorial was unveiled on Saturday, 14 December 1940, with hundreds in attendance. There are a total of seven commemorative stone seats placed along the Bridle Path; most of these were built for the Canterbury centenary celebrations in 1950.

All content from Kiddle encyclopedia articles (including the article images and facts) can be freely used under Attribution-ShareAlike license, unless stated otherwise. Cite this article:
Bridle Path (New Zealand) Facts for Kids. Kiddle Encyclopedia.