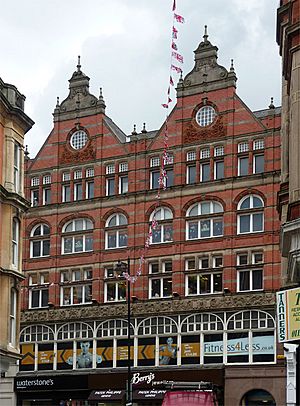 Bridlesmith Gate is a pedestrianised shopping street in the city centre of Nottingham, England. It is located between Middle Pavement and Victoria Street. St. Peter's Gate and Bottle Lane stem off it along with Byard Lane.

Bridlesmith Gate has existed since the Middle Ages. Until the 19th century it was the main shopping street in Nottingham, and formed part of a London to Leeds coach route. In 1819 the street was re-paved and gas lighting was installed by the Nottingham Gas Light and Coke Company. It was renamed Bond Street, after the street of the same name in London which was just becoming fashionable, however the name change was soon abandoned.

The northern end was completely re-constructed and widened in 1852 and most of the street was pedestrianised in 1973.

All content from Kiddle encyclopedia articles (including the article images and facts) can be freely used under Attribution-ShareAlike license, unless stated otherwise. Cite this article:
Bridlesmith Gate Facts for Kids. Kiddle Encyclopedia.