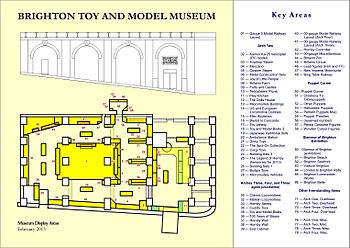 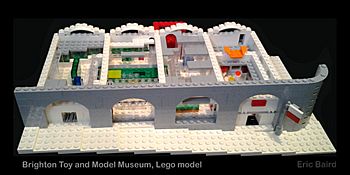 The museum and its internal layout, with around seventy display areas rendered in Lego 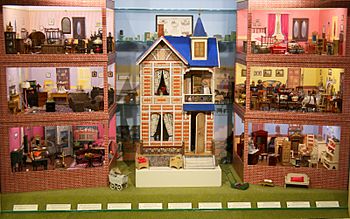 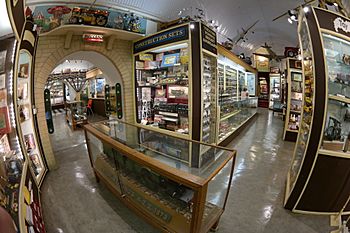 Inside the museum's ticketed area 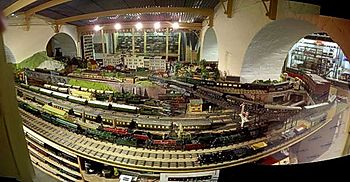 Another area of the 0-gauge layout

Brighton Toy and Model Museum (sometimes referred to as Brighton Toy Museum) is an independent toy museum situated in Brighton, East Sussex (registered charity no. 1001560). Its collection focuses on toys and models produced in the UK and Europe up until the mid-Twentieth Century, and occupies four thousand square feet of floor space within four of the early Victorian arches supporting the forecourt of Brighton railway station. Founded in 1991, the museum holds over ten thousand toys and models, including model train collections, puppets, Corgi, Dinky, Budgie Toys, construction toys and radio-controlled aircraft.

Entrance to the first arch of the museum, containing the foyer/shop area and the Brighton Visitor Information Point, is free. This area provides free maps and brochures, and has a small "stocking filler" toy shop used by visiting school trips, secondhand books, and a set of "Collector's Market" cabinets containing collectables that are sold on a commission basis.

It also contains the "Glamour of Brighton" exhibition, whose Brighton-related models and displays include the Brighton Pavilion, Magnus Volk's electric and seashore electric railways, the old Brighton locomotive works, and the Brighton Belle Pullman train.

The largest exhibits in the foyer are a quarter-scale coal-fired traction engine, a large motorised Meccano Ferris wheel, and an overhead quarter-scale radio-controlled Spitfire model aircraft.

The first arch also contains offices and construction and restoration workshops that are not open to the public.

Exhibition displays draw on outside guest collections and on varying selections taken from the Museum's core collection.

The museum is a venue for the Brighton Science Festival and the Brighton Fringe. Public train running days are typically held twice a year (Spring and Autumn), and the museum's Education section organises school visits with optional puppet shows and talks.

As well as a carpentry workshop that produces the museum's cabinetry and displays, the museum also has a world-class toy repair and restoration workshop, with tinsmithing tools and its own sample library of parts and reference paint finishes.

The reference library is the centre of most of the historical research that takes place in the museum, and a source of material for the museum's online knowledgebase.

The museum became the first community rail partner to Brighton Station in March 2013.

In 2013, the museum announced a twinning with the Rahmi M. Koç Museum, Istanbul. 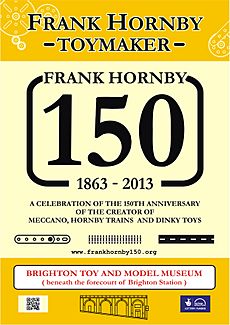 A 2012 grant from the Heritage Lottery Fund helped the museum to coordinate, publicise and organise celebrations and events during 2013 to mark the 150th anniversary of the birth of Frank Hornby.

The grant funded an expansion of the Museum's online coverage of Meccano, Hornby trains and Dinky Toys, a public wifi access point, and the installation and ongoing development of a touchscreen information system to allow members of the public to retrieve information on exhibits from around the museum.

The Brighton Toy and Model Index

The Brighton Toy and Model Index (ISSN 2399-1798) is an online resource on toys and models made up until around 1960, maintained and updated by the museum. The "Index" runs on the MediaWiki platform, and as of March 2018 has over seven thousand content pages and a similar number of images.

The museum is usually closed on Mondays for maintenance work and cleaning, and for larger school visits that would be disruptive during normal public days. Its standard opening times are:

The building has been adapted for wheelchair users but the museum requests advance notice if any member of a party requires wheelchair access. [1]

School visits can be organised through the Education Officer. Advance notice is also requested for other group visits to avoid scheduling conflicts.

Brighton Toy And Model Museum is an independent, non-profit organisation and a registered charity. The museum's Trustees are:

All content from Kiddle encyclopedia articles (including the article images and facts) can be freely used under Attribution-ShareAlike license, unless stated otherwise. Cite this article:
Brighton Toy and Model Museum Facts for Kids. Kiddle Encyclopedia.