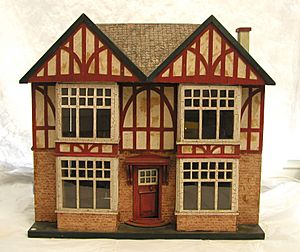 Tudor style dollhouse from around 1930

Early dollhouses were seen more than 400 years ago as baby house display cases in Europe. Smaller dollhouses that looked like real houses on the outside appeared in Europe in the 18th century.

Early dollhouses were hand-made. After the Industrial Revolution and World War II, doll houses were mass produced. They became more standard and cost less to buy.

Mass-produced dollhouses include those related to the Barbie doll. 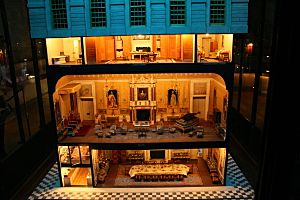 All content from Kiddle encyclopedia articles (including the article images and facts) can be freely used under Attribution-ShareAlike license, unless stated otherwise. Cite this article:
Dollhouse Facts for Kids. Kiddle Encyclopedia.