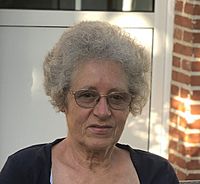 Brigitte Peskine (30 December 1951 – 5 September 2020) was a French author and screenwriter. She was born in Neuilly-sur-Seine, France. Her first novel was published in 1985 titled Le Ventriloqu. She was known for writing the screenplays for the French sitcoms Plus belle la vie and Candice Renoir.

All content from Kiddle encyclopedia articles (including the article images and facts) can be freely used under Attribution-ShareAlike license, unless stated otherwise. Cite this article:
Brigitte Peskine Facts for Kids. Kiddle Encyclopedia.