The British Rail Class 108 diesel multiple units were built by BR Derby from 1958 to 1961, with a final production quantity of 333 vehicles.

These units stayed in were used till the 1990s after which they were withdrawn from traffic. 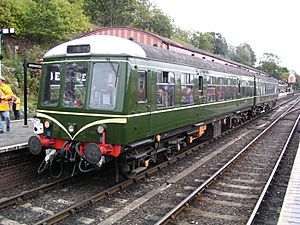 All content from Kiddle encyclopedia articles (including the article images and facts) can be freely used under Attribution-ShareAlike license, unless stated otherwise. Cite this article:
British Rail Class 108 Facts for Kids. Kiddle Encyclopedia.