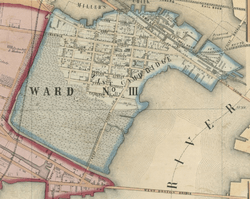 Detail from an 1854 map of Cambridge, showing the Broad Canal following Broadway and Portland Street.

Broad Canal is a short canal in East Cambridge, Massachusetts, previously larger and part of the now-vanished canal system that made Cambridge an active seaport.

The canal began in 1806 when Henry Hill, Rufus Davenport, and others laid out a canal system in the land and tidal flats along the Charles River. Broad Canal was dug before 1810, and 80 feet (24 m) wide from the low-water mark to Portland Street. In 1874 the lower part of the canal, between First and Third Streets, was 100 feet (30 m) wide. Connecting canals ran through much of today's East Cambridge.

No visible trace remains of that system, and extensive landfills have removed all remnants of Cambridge's seaport docks and wharves. Broad Canal's truncated remnants can now be found just north of Broadway, entering the Charles River immediately north of the Longfellow Bridge.

All content from Kiddle encyclopedia articles (including the article images and facts) can be freely used under Attribution-ShareAlike license, unless stated otherwise. Cite this article:
Broad Canal Facts for Kids. Kiddle Encyclopedia.