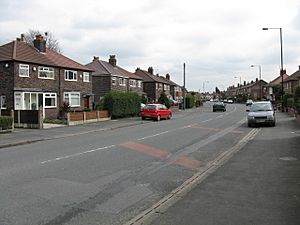 Broadheath is a town in Altrincham, Greater Manchester, England. Historically part of Cheshire, it had a population at the 2011 census of 12,538.

Broadheath railway station served the district between 1853 and closure in 1962. Passenger trains ran from Manchester via Sale to Broadheath and on to Lymm and Warrington.

All content from Kiddle encyclopedia articles (including the article images and facts) can be freely used under Attribution-ShareAlike license, unless stated otherwise. Cite this article:
Broadheath, Greater Manchester Facts for Kids. Kiddle Encyclopedia.