The Broadway–Phelps Park Historic District is located in Decorah, Iowa, United States. It was listed on the National Register of Historic Places in 1976. The historic district is composed of seven blocks of a residential area and the city's oldest park. It is located on a prominent hill in the heart of Decorah. Contributing properties include five churches, three government buildings (including the Winneshiek County Courthouse), a museum, brick kiln, a carriage house, and 36 private residences. Contributing sites include the city park square and the river bluff. The historic buildings were built from the 1850s to the early 1900s. Most of the structures are two or more stories, and were built in limestone, sandstone, or brick. The Ellsworth-Porter House is individually listed on the National Register of Historic Places. 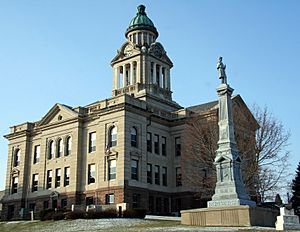 All content from Kiddle encyclopedia articles (including the article images and facts) can be freely used under Attribution-ShareAlike license, unless stated otherwise. Cite this article:
Broadway–Phelps Park Historic District Facts for Kids. Kiddle Encyclopedia.