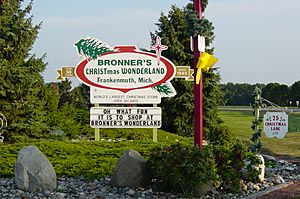 Designed with an Alpine architecture (see chalet) and operating year-round, the building is 7.35 acres (2.97 ha) in size with landscaped grounds covering 27 acres (11 ha). Outside the entrance are three 17-foot-tall (5.2 m) outdoor Santas and a 15-foot-tall (4.6 m) snowman. Inside, there are approximately 800 animated figurines at various locations throughout the store. Bronner's parking lot can accommodate up to 1,080 cars and 50 buses. Some 100,000 lights illuminate Bronner's one-half-mile-long (0.80 km) Christmas Lane in the evening. Michigan designated Bronner's as an "Embassy for Michigan Tourism" in 1976. Bronner's employs over 500 people during the holiday season (between October and Christmas). 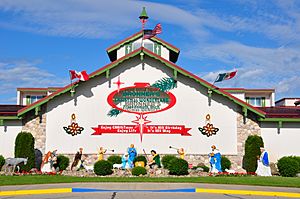 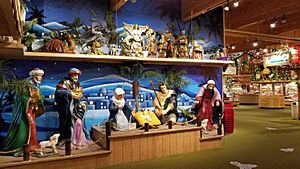 Tableau at the west entrance (June 2019)

Founded in 1945 by Wally Bronner, Bronner's Christmas Wonderland is visited annually by over two million people, with the weekend after Thanksgiving being the busiest of the year with over 50,000 visitors. Its inventory exceeds 50,000 trims and gifts, including Christmas ornaments, artificial Christmas trees, Christmas lights, Nativity scenes, Christmas decorations, collectibles, and similar goods. Each year, approximately 600,000 glass ornaments, 530,000 feet (160,000 m) of garland, 150,000 postcards and 86,000 light sets (nearly 530 miles [850 km] of light cords) are sold. Bronner's has the exclusive right to sell Precious Moments Christmas-themed figurines.

With the government of Austria's permission and in keeping with the German theme of Frankenmuth itself, Bronner's built a replica of the Oberndorf, Austria, Silent Night Memorial Chapel in 1992 as a tribute to the Christmas hymn "Silent Night".

The store is open 361 days per year. In 2018, there were over 350 decorated Christmas trees inside and products from 70 countries in the 320,000 square foot building. As of June 2019, the store had a 4.5 star rating based on reviews by customers on the TripAdvisor Web site.

All content from Kiddle encyclopedia articles (including the article images and facts) can be freely used under Attribution-ShareAlike license, unless stated otherwise. Cite this article:
Bronner's Christmas Wonderland Facts for Kids. Kiddle Encyclopedia.