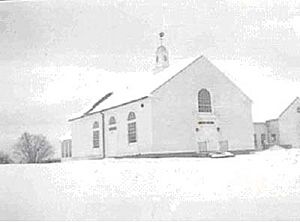 The Brookfield Center Historic District in Brookfield, Connecticut is a historic district that was listed on the National Register of Historic Places in 1991. It is located in the vicinity of the junction of Route 133 and Route 25. The district represents the original settlement of the town of Brookfield and contains 67 residential, religious, and municipal buildings over a 43-acre (17 ha) area representing a wide range of architectural styles from the 18th to 20th centuries including Bungalow/Craftsman, Greek Revival, and Queen Anne style architecture. The district includes the old town hall, the Congregational Church of Brookfield, Saint Joseph Church & Elementary School, Center Elementary School (Public), the former general store (now a real estate agency), St. Paul's Episcopal Church, and the surrounding residential neighborhood. The district is architecturally significant as an accurate representation of the historical development of the original settlement of the Town of Brookfield as the buildings are well-preserved from the time they were built with minimal alterations and intrusions, including their spatial relationships to one another.

The area that is now Brookfield was settled about 1700, and was given its own parish in 1754, formed out of portions of Danbury, New Milford, and Newtown. It was incorporated in 1788. The road junction was where the first church, town hall, school, and tavern were built. In addition to housing the central religious and political functions, the center area was also home to a number of private schools in the 19th century.

Contributing properties in the district include:

All content from Kiddle encyclopedia articles (including the article images and facts) can be freely used under Attribution-ShareAlike license, unless stated otherwise. Cite this article:
Brookfield Center Historic District (Brookfield, Connecticut) Facts for Kids. Kiddle Encyclopedia.