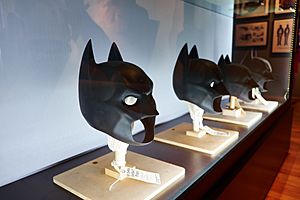 A helmet of Batman from The Dark Knight Rises.

Batman is the main hero of The Dark Knight Trilogy and based on the DC Comics character of the same name. He was played by Christian Bale in all three movies and in the video game based on Batman Begins.

Bruce Wayne was playing a game of finder's keepers with Rachel Dawes until he landed on a bat cave. He was rescued by his father, Thomas Wayne. After attending an opera featuring bats, his parents were killed by Joe Chill. Bruce Wayne left Gotham City and moved to Asia. He started to train as a member of the League of Shadows until he learned of their plans toward Gotham. He returned to Gotham and became Batman. He has encountered Jonathan Crane/The Scarecrow who has been gassing people with fear toxin supplied by the League of Shadows.

All content from Kiddle encyclopedia articles (including the article images and facts) can be freely used under Attribution-ShareAlike license, unless stated otherwise. Cite this article:
Bruce Wayne (The Dark Knight Trilogy) Facts for Kids. Kiddle Encyclopedia.