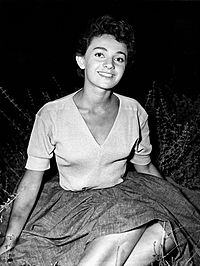 Brunella Bovo (4 March 1932 – 21 February 2017) was an Italian movie and television actress. She was born in Padua, Italy. She was known for her roles as Edvige in Miracle in Milan (1951) and as Wanda in The White Sheik (1952). She starred in many B-Movies and soap operas sometimes under the name Barbara Hudson.

All content from Kiddle encyclopedia articles (including the article images and facts) can be freely used under Attribution-ShareAlike license, unless stated otherwise. Cite this article:
Brunella Bovo Facts for Kids. Kiddle Encyclopedia.