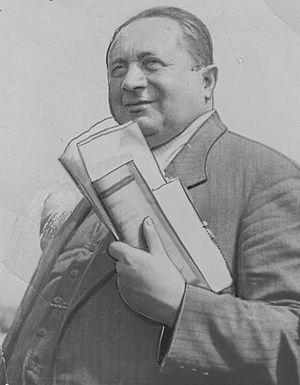 Bruno Stanisław Gruszka (6 October 1881 - 4 March 1941) was a Polish representative and politician. He worked as a councilman in Radymno. He was born in Skołoszów. He died in prison in Przemyśl.

Gruszka was born in a poor family. He was the only child of Ewa Bartoszewska and Michał Gruszka. He started his education in a middle school in Jarosław. Later he went to the teacher-training college in Tarnów. He studied law at the university in Lviv and Cracow.

When he studied, he joined “The Polish People's Party” (Polish: Polskie Stronnictwo Ludowe, abbreviated to PSL). In 1937 he was arrested and sent to prison in Lviv by peasant strike. (1937)

Bruno Gruszka took part in building-up PSL “Piast" (1913-1931). He was also a member of the Executive Board in Cracow and the District Executive Board in Jarosław. In 1922 he was the leader of the Senate committee and created the statute of the parliament.

He was the founder of the Farmers and Craftspeople’s Bank in Radymno and Przemyśl and Włościański Bank in Jarosław.

He led The Ropework Association in Radymno.

He was the chairman of the Gymnastics Association Sokół.

He was the chairman of The Agriculture Association of the Małopolska province in Lviv.

There is a street named after him. He was buried in the cemetery in Radymno.

All content from Kiddle encyclopedia articles (including the article images and facts) can be freely used under Attribution-ShareAlike license, unless stated otherwise. Cite this article:
Bruno Gruszka Facts for Kids. Kiddle Encyclopedia.