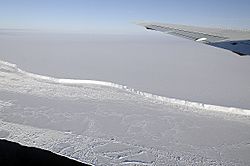 The Brunt Ice Shelf borders the Antarctic coast of Coats Land between Dawson-Lambton Glacier and Stancomb-Wills Glacier Tongue. It was named by the UK Antarctic Place-names Committee after David Brunt, British meteorologist, Physical Secretary of the Royal Society, 1948–57, who was responsible for the initiation of the Royal Society Expedition to this ice shelf in 1955.

It was the location of the base of the Royal Society Expedition, 1955–59 which was taken over as the British Halley Research Station.

The Brunt Icefalls (75°55′S 25°0′W﻿ / ﻿75.917°S 25.000°W﻿ / -75.917; -25.000) extend along Caird Coast for about 80 kilometres (50 mi), where the steep ice-covered coast descends to Brunt Ice Shelf. The icefalls were discovered November 5, 1967, in the course of a United States Navy Squadron VXE-6 flight over the coast in LC-130 aircraft, and was plotted by the United States Geological Survey from air photos obtained at that time. It was named by the Advisory Committee on Antarctic Names in association with the Brunt Ice Shelf.

In 2012 previously stable large chasms (cracks in the ice shelf which clearly go all the way through to the sea) in the ice shelf started expanding which was expected to cause large parts of the Brunt Ice shelf to break off within the next few years On 26 February, 2021, a 1,270 km2 (490 sq mi) Iceberg A-74 duly broke away from the north-facing Shelf, separating from edge of the shelf at the McDonald Ice Rumples along the North Rift and finally joining the Brunt-Stancomb chasm. As of the 28 February, A-74 was located at 75° 13' South, 25° 41' West and measures 30 nautical miles (56 km) on its longest axis and 18 nautical miles (33 km) on its widest axis.

All content from Kiddle encyclopedia articles (including the article images and facts) can be freely used under Attribution-ShareAlike license, unless stated otherwise. Cite this article:
Brunt Ice Shelf Facts for Kids. Kiddle Encyclopedia.