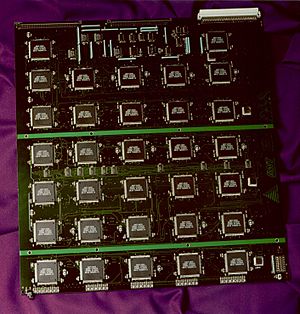 The Electronic Frontier Foundation's US$250,000 DES cracking machine has over 1,800 custom chips and could brute-force a DES key in a matter of days.

A brute force attack is a term in cryptanalysis. It means trying to break a coded cyphertext by trying a lot of possibilities with fast computers. For example, a large number of the possible keys are tried in the key space. If successful , this decrypts the encrypted message.

The brute force attack can be used together with a dictionary attack.

All content from Kiddle encyclopedia articles (including the article images and facts) can be freely used under Attribution-ShareAlike license, unless stated otherwise. Cite this article:
Brute force attack Facts for Kids. Kiddle Encyclopedia.