Bryan is a ghost town in Sweetwater County in the U.S. state of Wyoming. Bryan is located approximately 12 miles (19 km) west of Green River along the Blacks Fork River, and for a short time was the local headquarters and division point of the Union Pacific Railroad. Today, only a few concrete foundations remain. 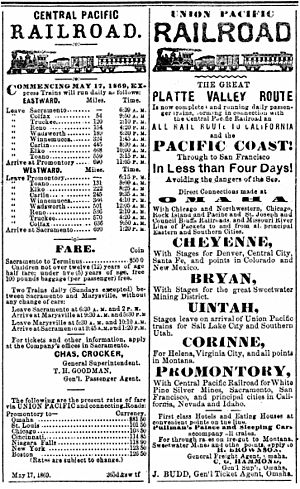 As with other cities in Wyoming, squatters rushed to occupy land in Green River City, in anticipation of the arrival of the transcontinental railroad, in 1868. Unwilling to negotiate with the squatters, the railroad instead laid out a new town to the west of Green River, along the Blacks Fork River, and established it as the local headquarters of the railroad. Stage service was established between Bryan and Green River and from there connecting to mines and towns throughout Wyoming.

All content from Kiddle encyclopedia articles (including the article images and facts) can be freely used under Attribution-ShareAlike license, unless stated otherwise. Cite this article:
Bryan, Wyoming Facts for Kids. Kiddle Encyclopedia.