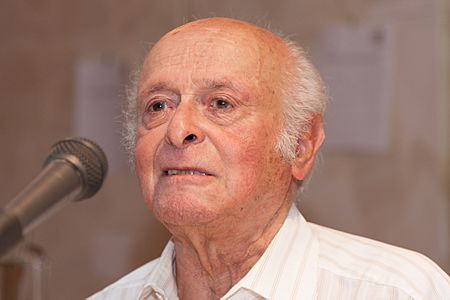 Bernhard "Buddy" Elias (2 June 1925 – 16 March 2015) was a Swiss actor and president of the Anne Frank Fonds. He was born in Frankfurt am Main, Germany. He was the cousin of Anne Frank. Elias was known for his role as Agent Ute Nicolai in the 2014 movie The Monuments Men.

Elias died in Basel, Switzerland at the age of 89.

All content from Kiddle encyclopedia articles (including the article images and facts) can be freely used under Attribution-ShareAlike license, unless stated otherwise. Cite this article:
Buddy Elias Facts for Kids. Kiddle Encyclopedia.