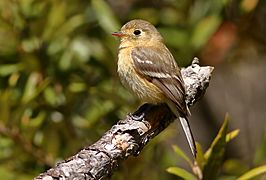 The buff-breasted flycatcher (Empidonax fulvifrons) is a small insectivorous bird. It is the smallest Empidonax flycatcher, typically ranging from 11.5 to 13 cm (4.5 to 5 in) in size.

Their preferred breeding habitat is scrub and open woodlands. They usually make a cup nest in the forks of trees. Females usually lay two eggs at a time.

The range of the buff-breasted flycatcher extends from extreme southeastern Arizona in the United States through Mexico to southern Honduras.

These birds are partial migrants, retreating from their northern breeding areas in the United States and northern Mexico for the winter.

To feed, they often wait on an open perch of a shrub or low branch of a tree and fly out to catch insects in flight. They also sometimes pick insects from foliage while hovering.

The song is an alternating versed PIdew, piDEW. The call is a loud dry pit.

All content from Kiddle encyclopedia articles (including the article images and facts) can be freely used under Attribution-ShareAlike license, unless stated otherwise. Cite this article:
Buff-breasted flycatcher Facts for Kids. Kiddle Encyclopedia.