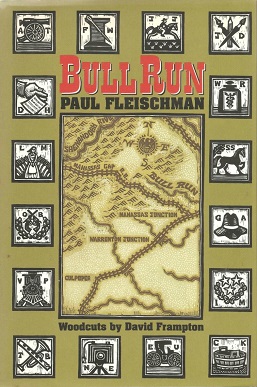 Bull Run is a historical novel for children by Paul Fleischman, published in 1993. It consists of sixteen monologues by participants in the First Battle of Bull Run in 1861. The novel has won several awards.

This historical fiction novel, written by Paul Fleischman, highlights the events surrounding the first major battle of the American Civil War, the Battle of Bull Run. It is told through the first-person perspectives of 16 different characters, both Union and Confederate. .

All content from Kiddle encyclopedia articles (including the article images and facts) can be freely used under Attribution-ShareAlike license, unless stated otherwise. Cite this article:
Bull Run (novel) Facts for Kids. Kiddle Encyclopedia.