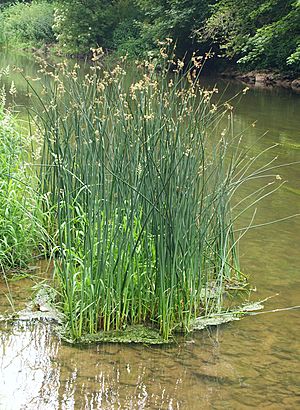 Example of the bulrush genus Schoenoplectus.

Bulrushes is the vernacular name for several large wetland grass-like plants in the sedge family (Cyperaceae).

The name is particularly applied to several sedge family genera:

Outside of the sedge family, the name is used for Typha, a genus in the family Typhaceae. The Botanical Society of Britain and Ireland recommends "bulrush" as a common name for plants in the genus Typha. These species are sometimes known as reed mace in the United Kingdom. They are sometimes also called cattails.

One particular famous story involving bulrushes is that of the ark of bulrushes in the Book of Exodus. In this story, it is said that the infant Moses was found in a boat made of bulrushes. Within the context of the story, this is probably paper reed (Cyperus papyrus).

When fish make beds over bulrush, they sweep away the sand, exposing the roots. This dense region of roots provides excellent cover for young fish.

All content from Kiddle encyclopedia articles (including the article images and facts) can be freely used under Attribution-ShareAlike license, unless stated otherwise. Cite this article:
Bulrush Facts for Kids. Kiddle Encyclopedia.