Eucalyptus burdettiana, commonly known as Burdett gum or Burdett's mallee, is a species of flowering plant in the family Myrtaceae and is endemic to Western Australia. It is a mallee or shrub with smooth bark, lance-shaped adult leaves, flower buds with an elongated horn-shaped operculum, greenish-yellow flowers and cup-shaped or bell-shaped fruit. 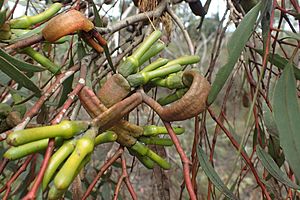 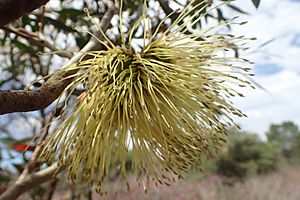 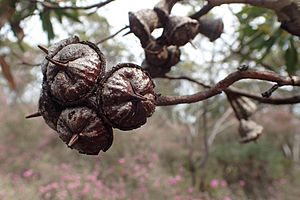 Eucalyptus burdettiana was first formally described by William Blakely and Henry Steedman in 1939 and the description was published in Contributions from the New South Wales National Herbarium from specimens collected by Steedman on stony outcrops of Mount Barren near Hopetoun in 1938. The specific epithet (burdettiana) honours William Burdett (1871-1940) who was a friend of Henry Steedman.

Burdett gum is found on quartzite ridges and rocky areas of the Barren Range in the Fitzgerald River National Park where it grows in sandy soils. The only remaining population is composed of 140 plants split into five sub-populations.

This eucalypt is classified as "endangered" under the Australian Government Environment Protection and Biodiversity Conservation Act 1999 and as "Threatened Flora (Declared Rare Flora — Extant)" by the Department of Environment and Conservation (Western Australia). The main threat to the species is inappropriate fire regimes.

All content from Kiddle encyclopedia articles (including the article images and facts) can be freely used under Attribution-ShareAlike license, unless stated otherwise. Cite this article:
Burdett gum Facts for Kids. Kiddle Encyclopedia.