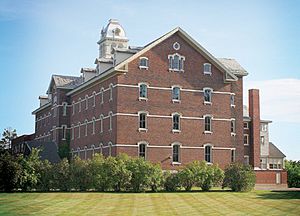 Burlington College was a private, non-profit liberal arts college located in Burlington, Vermont, that offered associate, bachelor's, and master's degrees, as well as several professional certificates. Although regionally accredited by the New England Association of Schools and Colleges, the college was placed on probation in July 2014 for failing to meet the accreditor's standards regarding financial resources.

All content from Kiddle encyclopedia articles (including the article images and facts) can be freely used under Attribution-ShareAlike license, unless stated otherwise. Cite this article:
Burlington College Facts for Kids. Kiddle Encyclopedia.