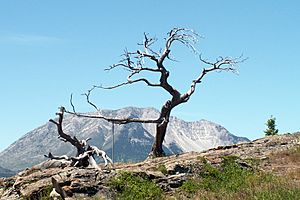 The Burmis Tree is a limber pine located in south western Alberta in the community of Burmis, Alberta, along the Crowsnest Highway (Highway 3) and east of municipality of Crowsnest Pass. The tree died in the late 1970s after losing its needles. Limber trees are known to survive harsh conditions and are one of the longest living trees in Alberta. The Burmis tree was estimated to be between 600 and 750 years old. In 1998, it was toppled by wind, however members of local community refused to leave it lying. The tree was stabilized by Alberta Culture, Historic Sites staff using stainless steel rods and brackets. In 2004, vandals cut one of the tree's main branches. Locals fixed it again with glue and a prop pole. The community rallied to have the new Highway 3 built around the tree rather than destroy the heritage symbol it has become. The tree remains as the sole point of interest in the once prosperous town of Burmis.

Burmis Tree is also a band from Vancouver BC, playing dark regional folk/rock and named after the limber pine.

All content from Kiddle encyclopedia articles (including the article images and facts) can be freely used under Attribution-ShareAlike license, unless stated otherwise. Cite this article:
Burmis Tree Facts for Kids. Kiddle Encyclopedia.