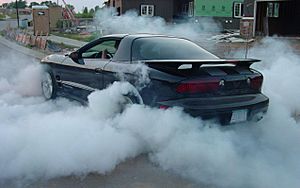 A burnout (also known as a peel out or power brake) is the practice of keeping a vehicle still (or close to) and spinning its wheels, causing the tires to heat up and smoke due to friction. 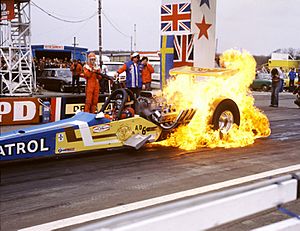 The origins of burnouts can be traced to drag racing, where they have a practical purpose: drag racing tires perform better at higher temperatures. A burnout is the fastest way to raise tire temperature before a race. It also cleans the tires of any debris and lays down a layer of rubber near the starting line for better traction. Drag race tracks sometimes use specially-reserved, wet-surface areas (burnout boxes) for burnouts.

Burnouts are also common in informal street racing, usually for show value. As with all street racing activities, burnouts on public property are illegal in most countries but the severity of punishments vary. In New South Wales, for example, police have the power to confiscate the offending vehicle for 3 months for a first offense.

Burnouts are also sometimes performed by winning drivers at the end of NASCAR races to celebrate their victory.

Burnouts in front wheel drive vehicles are likely to result in damage to the wehicle.  They are usually achieved by holding the emergency brake (e-brake) to lock up the rear tires while flooring the gas pedal. 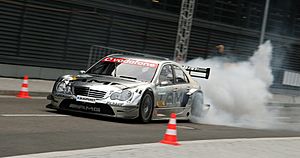 To burnout in a rear wheel drive vehicle the driver usually has to press the gas and brake pedals at the same time.  The brake pedal will require modulation The goal is to allow the rear tires to spin while holding the car in place with the front wheels remaining motionless. At a certain point of balance, the front brakes will prevent the car from moving forward while the rear brakes will have insufficient grip to keep the wheels from spinning, because engine power is transferred to the rear wheels only.

It is possible to make rear-wheel drive burnouts easier by installing "line locks", devices which allow fluid pressure on the front brakes to be maintained while releasing the pedal to free the rear brakes. This is useful in a manual transmission vehicle, where it can be quite difficult to manipulate the clutch, brake and gas pedals simultaneously. Line locks also reduce wear to the rear brakes, a common problem otherwise.

Burnouts are most difficult to perform in four-wheel drive and all-wheel drive cars, as they have better traction than FWD or RWD vehicles. It requires significantly more powerful engines to break all four tires loose at the same time and the tires will spin for only a short while before all four gain traction.

All content from Kiddle encyclopedia articles (including the article images and facts) can be freely used under Attribution-ShareAlike license, unless stated otherwise. Cite this article:
Burnout Facts for Kids. Kiddle Encyclopedia.