Burraboi is a community in New South Wales, Australia. It is in the southwestern part of the Riverina and situated about 34 kilometres (21 mi) north of Barham and 50 km south of Moulamein. At the 2016 census, Burraboi had a population of 63.

The largest rice silo complex in the southern hemisphere is located at Burraboi. 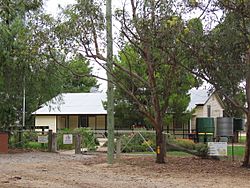 All content from Kiddle encyclopedia articles (including the article images and facts) can be freely used under Attribution-ShareAlike license, unless stated otherwise. Cite this article:
Burraboi Facts for Kids. Kiddle Encyclopedia.