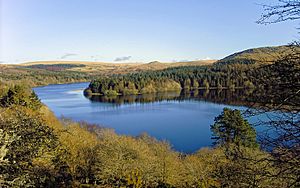 Burrator Reservoir is a reservoir on the south side of Dartmoor in the English county of Devon. It is one of a number of reservoirs and dams that were built over the course of the 19th and 20th centuries in the area now covered by Dartmoor National Park to supply drinking water to the city of Plymouth and other rapidly growing towns in the surrounding lowlands.

Burrator Reservoir was completed in 1898, and the reservoir was expanded in 1929. The reservoir was built under the supervision of Edward Sandeman (1862-1959), the Water Engineer for Plymouth. The reservoir has two dams, the Burrator Dam, which is built across the River Meavy at Burrator Gorge at the south-western end, and the Sheepstor Dam built on a dividing ridge between the Meavy and Sheepstor Brook at the south-eastern end. The Burrator Dam was the first of the two to be built, with construction starting on 9 August 1893. It is the more massive of the two dams, constructed of concrete faced with granite blocks. The Sheepstor Dam was built in 1894 and is an earth embankment with a core wall of puddled clay above the original ground level, with a concrete section below ground. The reservoir was officially opened on 21 September 1898.

In 1923 it was decided to enlarge the capacity from 668 million gallons to 1,026 million. This was achieved by raising the height of both dams by 10 feet. Work began in December 1923, and a temporary suspension bridge was built near Burrator Dam to carry traffic while the work proceeded. The reservoir was officially re-opened on 12 September 1928. 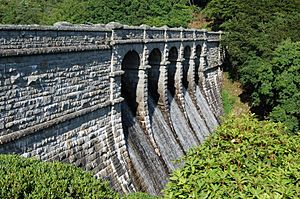 The reservoir is now managed by the South West Lakes Trust, and is a popular spot for leisure activities including walking, cycling and fishing.

All content from Kiddle encyclopedia articles (including the article images and facts) can be freely used under Attribution-ShareAlike license, unless stated otherwise. Cite this article:
Burrator Reservoir Facts for Kids. Kiddle Encyclopedia.