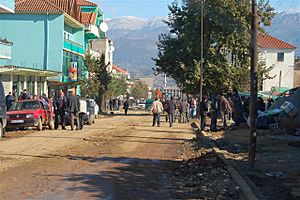 Burrel is a small town in Albania. It is 91 km from Tirana. Its population is about 18,000. It is about 320 metres above sea level, and surrounded by mountains.

The area was settled about the 8th century BC by the Illyrians. There have been 54 Illyrian burial mounds found around Burrel. The town of Burrel began in 1922 as the centre of the Mat District.

All content from Kiddle encyclopedia articles (including the article images and facts) can be freely used under Attribution-ShareAlike license, unless stated otherwise. Cite this article:
Burrel, Albania Facts for Kids. Kiddle Encyclopedia.