Burtville is an abandoned town in the Goldfields-Esperance region of Western Australia, located 29 kilometres (18 mi) south east of Laverton.

In 1897, Gold was discovered in the area by two prospectors, B. Frost and J. Trugurtha. The surveyor, J. Rowe, planned the town lots in accordance with the Goldfields Act in 1901. The settlement was initially known as Merolia which is the Indigenous Australian name for the district. 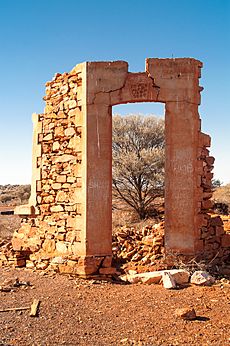 The population of the town and district rose to approximately 400 by 1903 as a result of gold mining. The town also had a water supply from a government well and a sealed pan sanitation system. A police station was opened in 1903 along with a school and two hotels. A ten stamp state battery and five stamp battery known as The Burtville Ore Reduction works were operated within the town from 1903 to 1906. Another privately owned ten stamp battery that allowed public access known as The sons of Westralia was also operating at the time.

By 1916 the population had reduced to 45 and the police station was closed.

All that remains of the town today is the entrance door arch of one of the town's hotels.

All content from Kiddle encyclopedia articles (including the article images and facts) can be freely used under Attribution-ShareAlike license, unless stated otherwise. Cite this article:
Burtville, Western Australia Facts for Kids. Kiddle Encyclopedia.