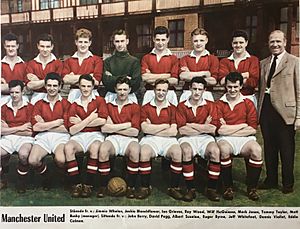 The Busby Babes was a nickname given to a group of players that played for Manchester United. The players with this nickname were recruited by Manchester United's chief scout Joe Armstrong and assistant manager Jimmy Murphy, and would be progressed to the first team by manager Matt Busby. The term was commonly used for players who joined the Manchester United academy during the 1940s and 1950s.

The term was first used in 1951 by Manchester Evening News journalist Tom Jackson. The term was commonly used to refer to the players that won the 1955–56 and the 1956–57 Football League First Division titles.

The last player Matt Busby would sign was Sammy McIlroy in 1969. He was known as "The last of the Busby Babes"

All content from Kiddle encyclopedia articles (including the article images and facts) can be freely used under Attribution-ShareAlike license, unless stated otherwise. Cite this article:
Busby Babes Facts for Kids. Kiddle Encyclopedia.